The Shaman Book is an ongoing collection of over squared white on black drawings. The project started after a trip in Berlin where I met my first Shaman. I always carry with me my black papers to continue the project: so far it's been in Verona, Berlin, Itoshima, Osaka, Singapore, Daisen... adding pieces to the puzzle.
The first series is part of a private art collection.

Stefano Buro and I met one day several years ago. We were both sitting on an ex-sofa, minding our own business, when we were suddenly caught unawares by a man wearing pink spurred boots and waving a gun (pink, no less) as he threatened to pull the trigger and kill us all. Buro and I then engaged in a heated dialogic exchange with the man. The question was resolved in a rather unusual way: the aspiring terrorist decided to move into my house, where he still lives. To tell the truth, I must add that he's always kept threatening to pull the trigger, but he never has. I must admit that, had that man failed to appear that day, it would have been unlikely that I would have deepened my acquaintance with Stefano Buro since he was sitting next to me on the ex-sofa, but was completely lost in his thoughts. I later discovered he was thinking about the boat on the lawn in which he plans to live one day. We've subsequently met on a number of occasions and I have also had the pleasure of meeting many interesting people who are his friends. Buro's friends aren't like those of ordinary people. His live within his thoughts and come and go, shaped by his hands. It may seem strange, but that's the way it is. No matter what one is actually doing, being with him is always like setting off on a journey. He's never afraid of traveling. Not even to the realm of Insanity. I've traveled through many worlds with him and I know he's traveled through many more. Stefano Buro is always on a journey, which is of the mind when the body lies idle, or of the body when the mind is at rest. He wears shoes and a jacket - even at home - so as to be ready to venture out at any time. I really like hearing about his travels and the last trip he told me about was the one he set out on to visit his magical friend in Berlin. The images conjured up by his stories are like an acid trip, but they're actually spiritual apparitions that materialize in the name of friendship. He loves his magical friend so much. His friend "from Berlin" is indeed special. When I felt the need to gain a better understanding of what Stefano was telling me, as if by magic, he telepathically tuned into my wavelength. Even if his words didn't follow a given sequence, everything seemed clear. I also owe much of my understanding of what happened in Berlin to his cat. Stefano Buro's cat, I mean. I've discussed the issue at length with him and he's explained what his owner's line of thought consists of. He claims his owner has developed a philosophical theory based on "feline materialism." It is a kind of wily interpretation of reality based on a sidelong, colorblind view of the world, which especially unfurls at night. The cat assures me that, when Stefano sips his tea, he becomes more lucid (he drinks tea all the time, be it winter or summer, no matter the hour) and it is then that his thoughts take on a visual form. His logical processes develop along the surface, which is always observed as if from beneath a floor, thus following unusual visual paths. Such paths are traced by his superego, which he wears with the slyness of a fox. Like a figurehead, the hood of knowledge leads the way. He's acquainted with stones, water, fire, stars, fish, and oh-so-many flickers -- as many as all the tail-wagging spermatozoa in the entire world. The Moon, Milky Way, and spermatozoa are all alike in color. Even his Shamans are the same color. And so are Stefano and Spimpy. On a black night in Berlin, Stefano Buro and his friend merrily radiate their light. 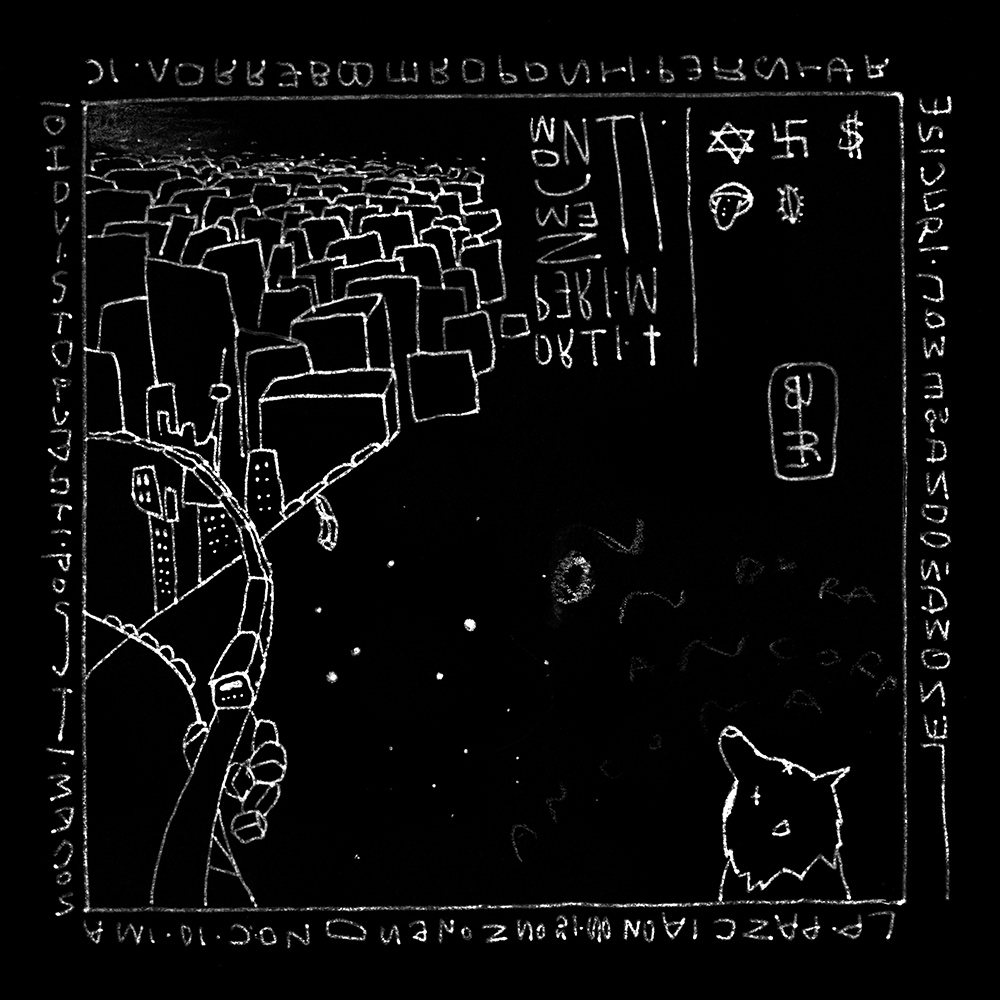 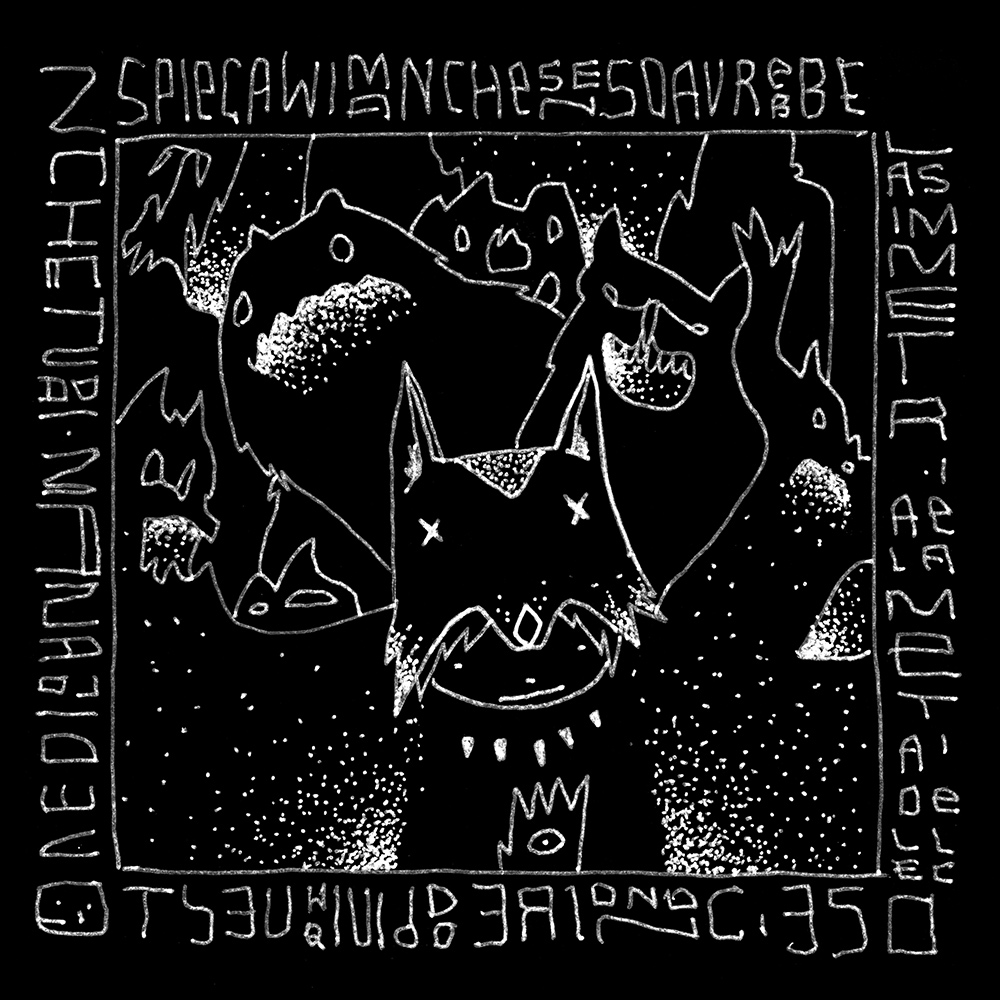 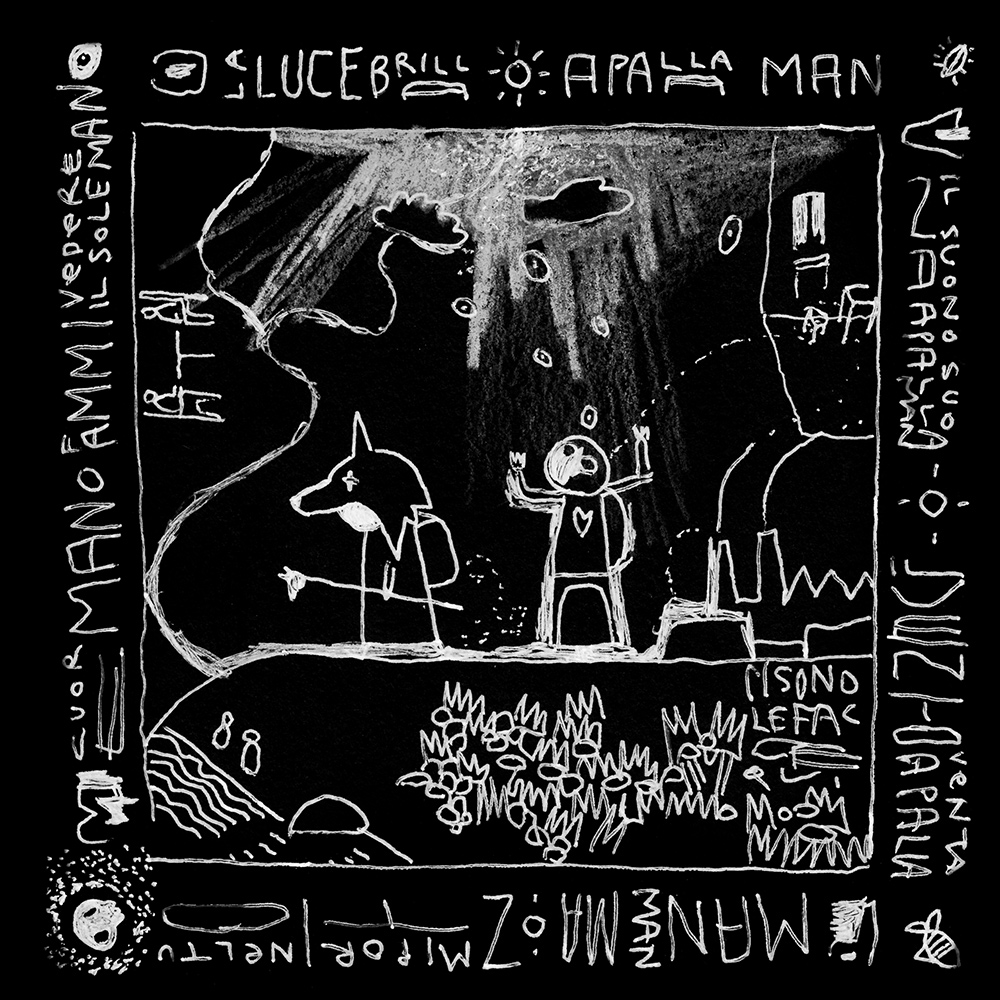 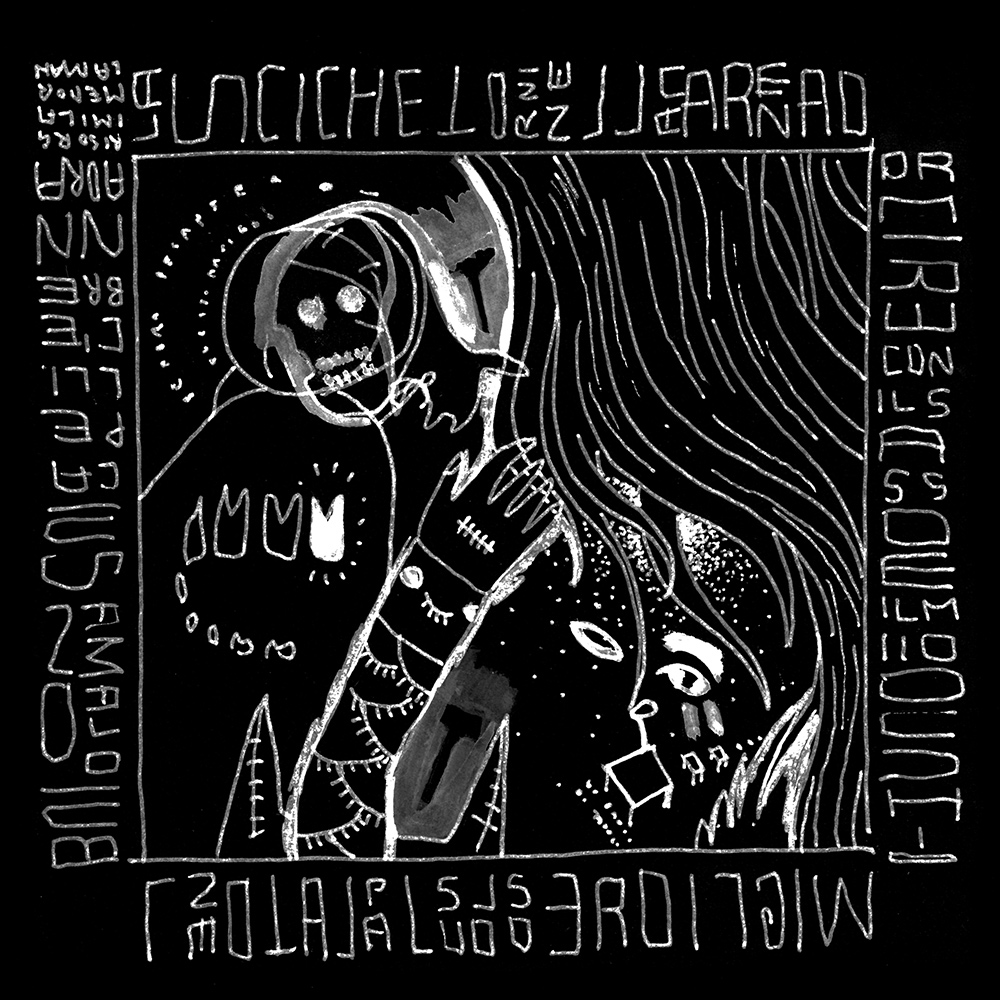 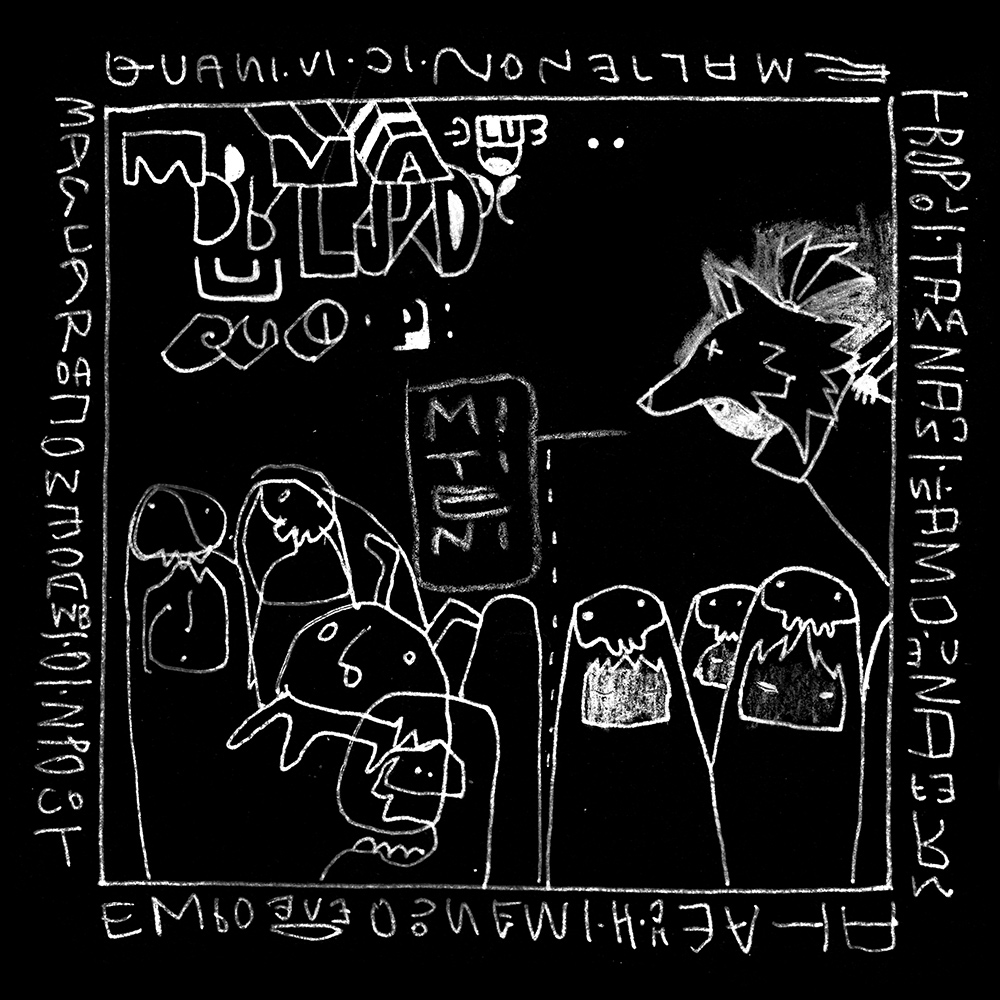 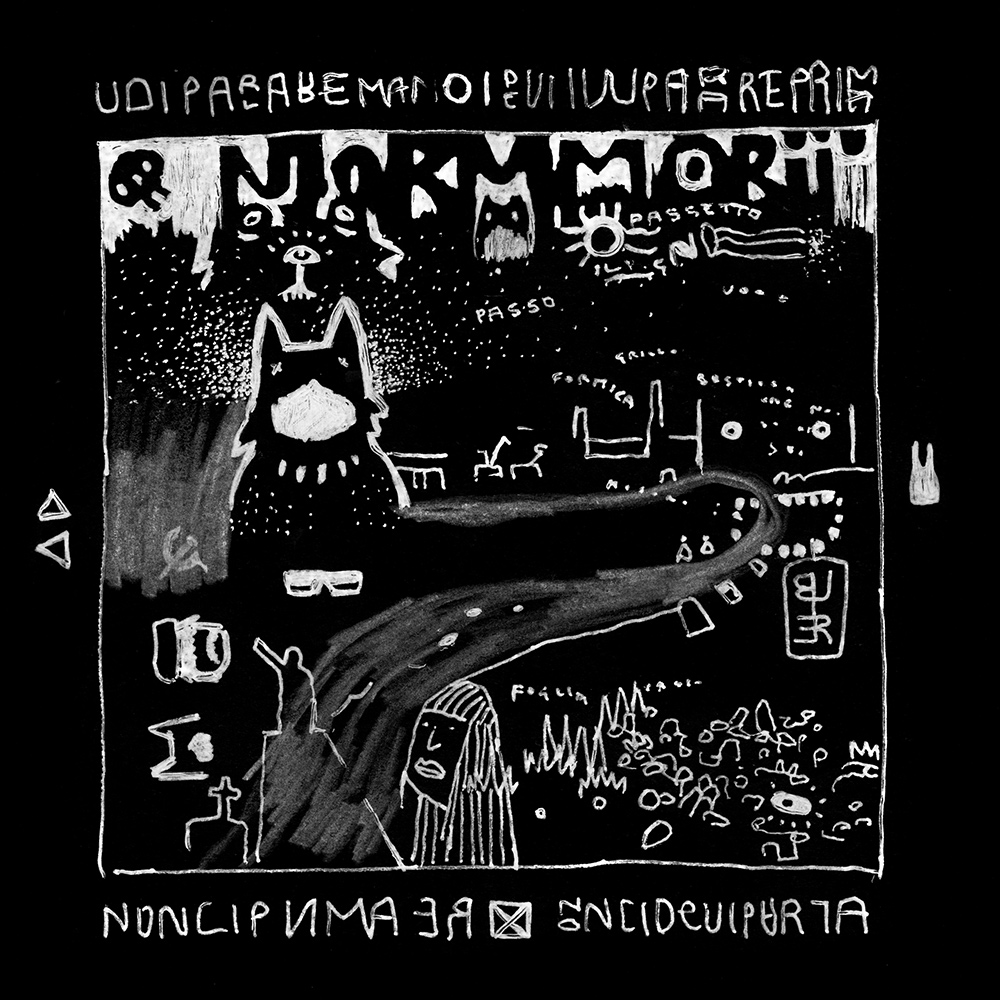 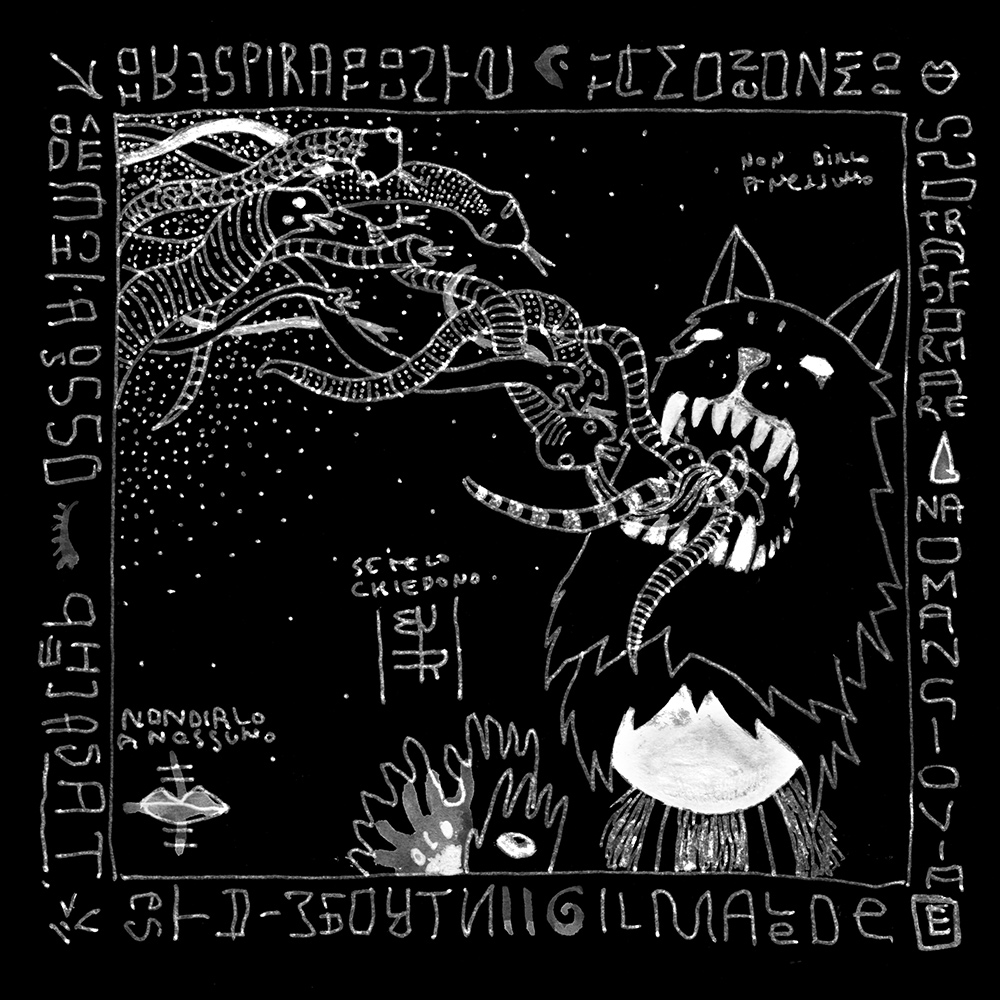 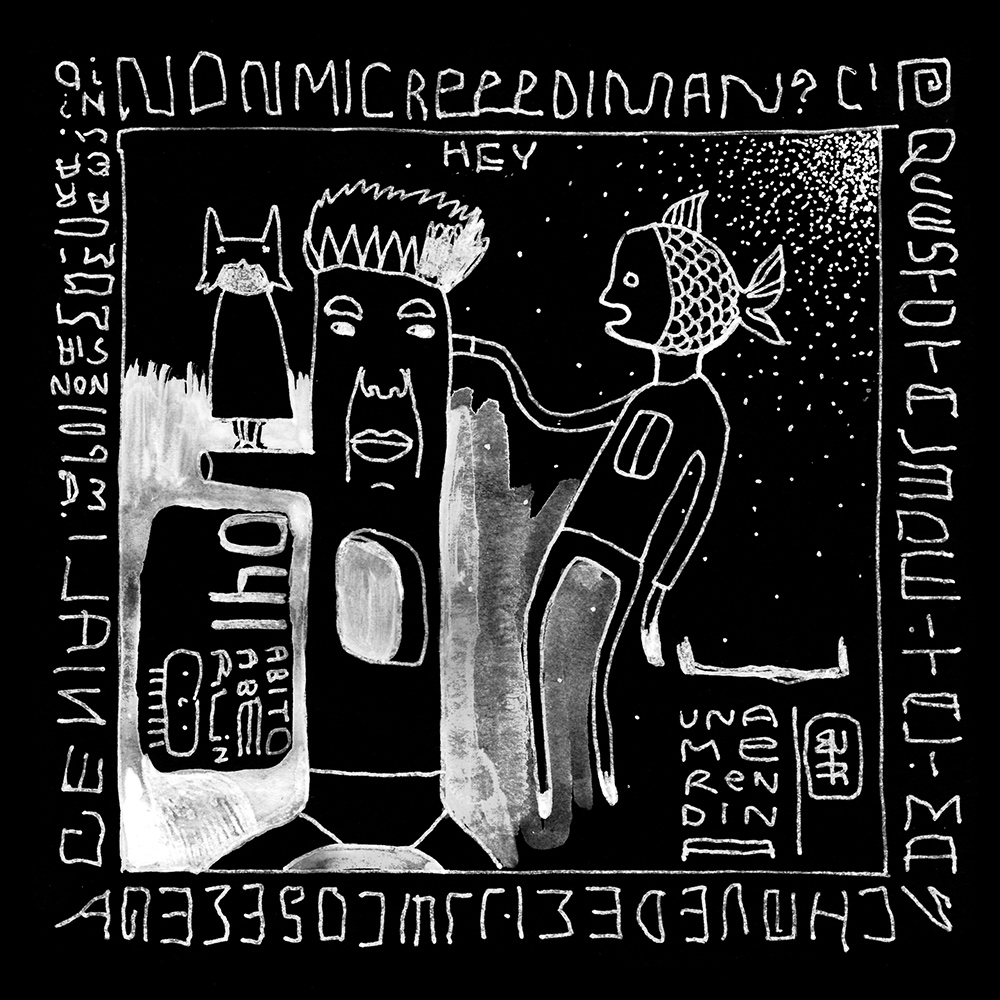 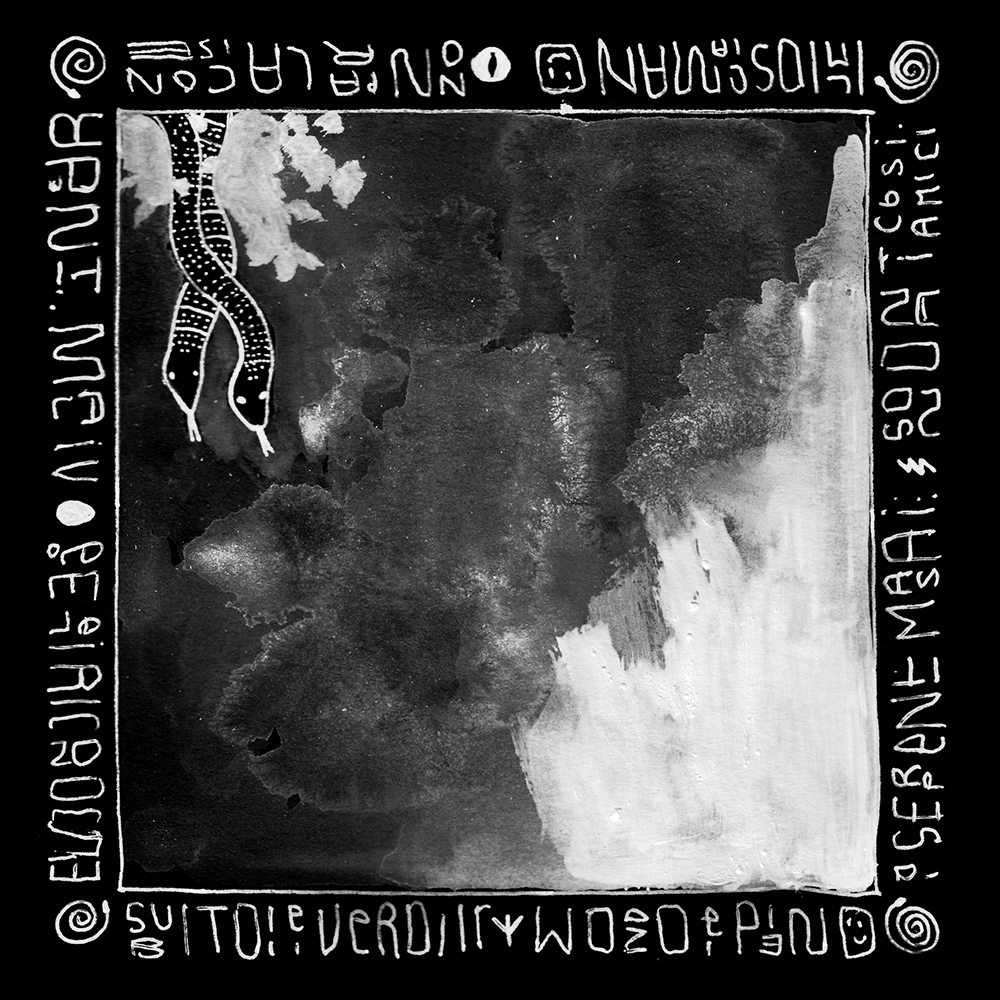 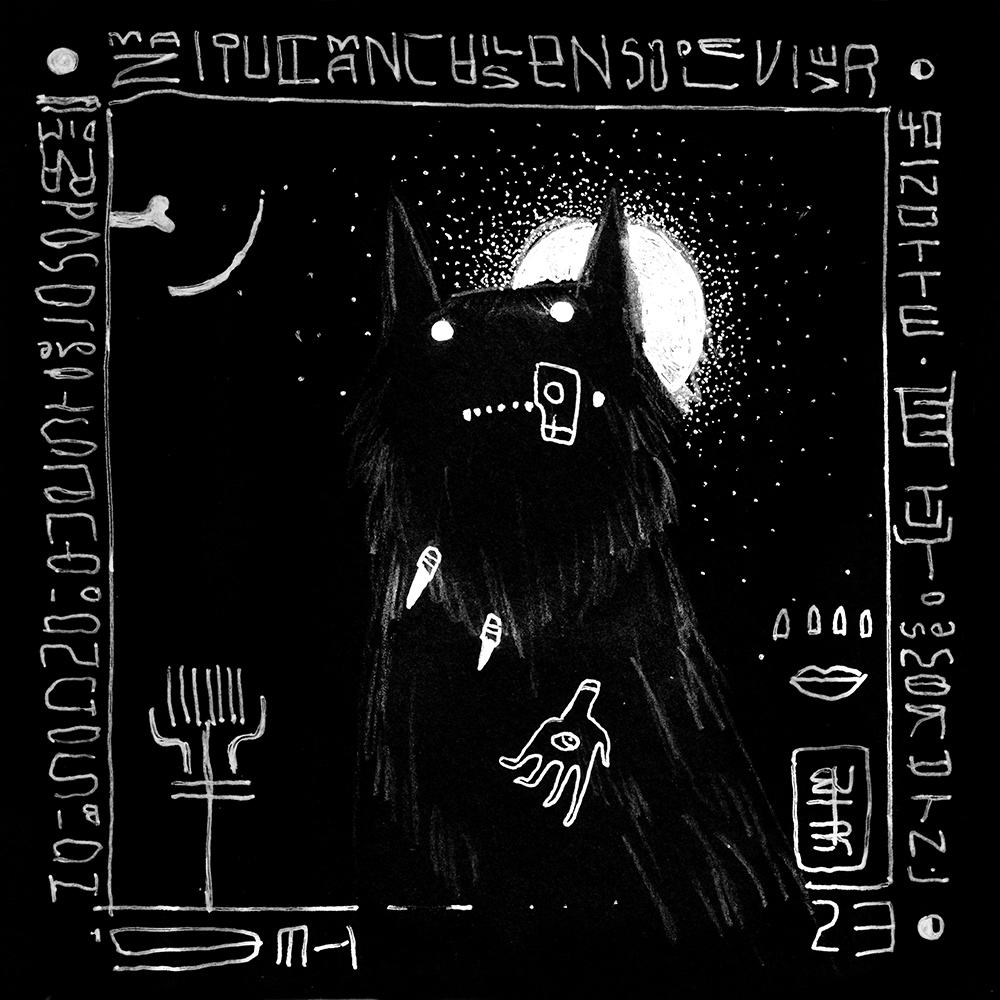 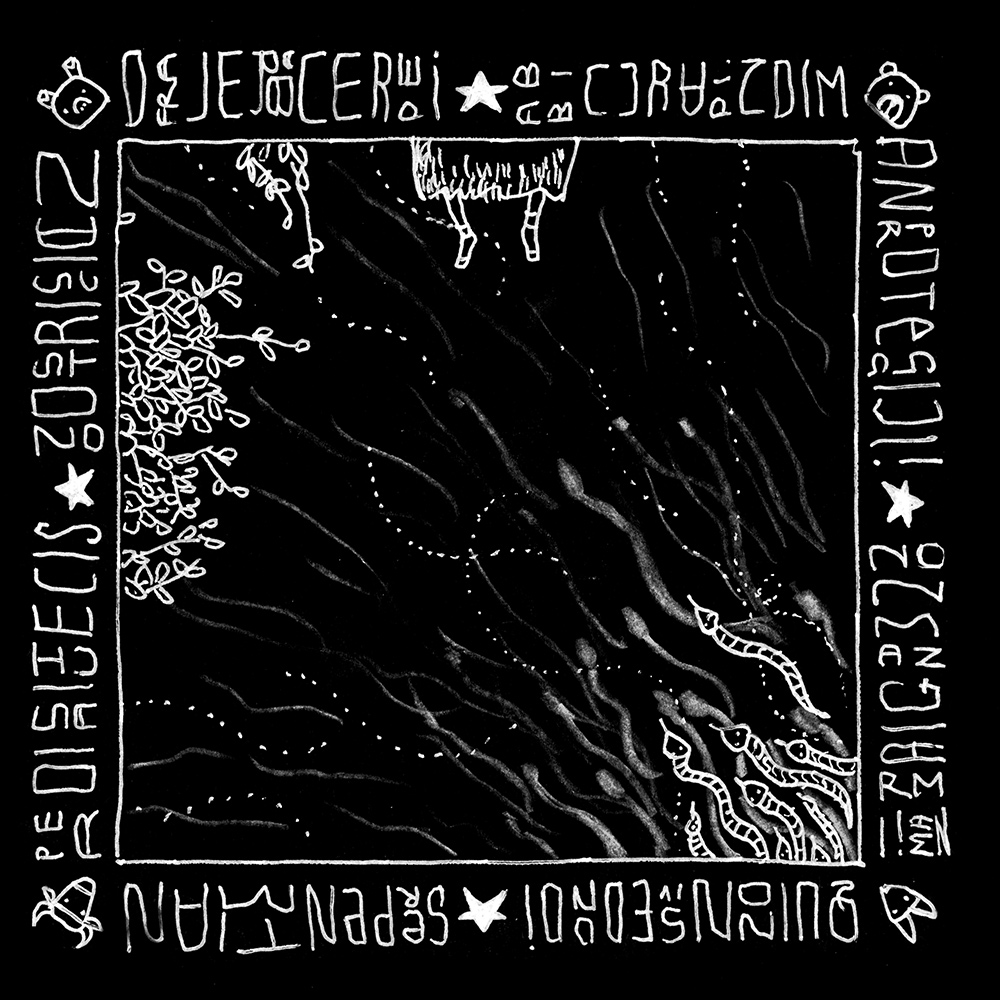 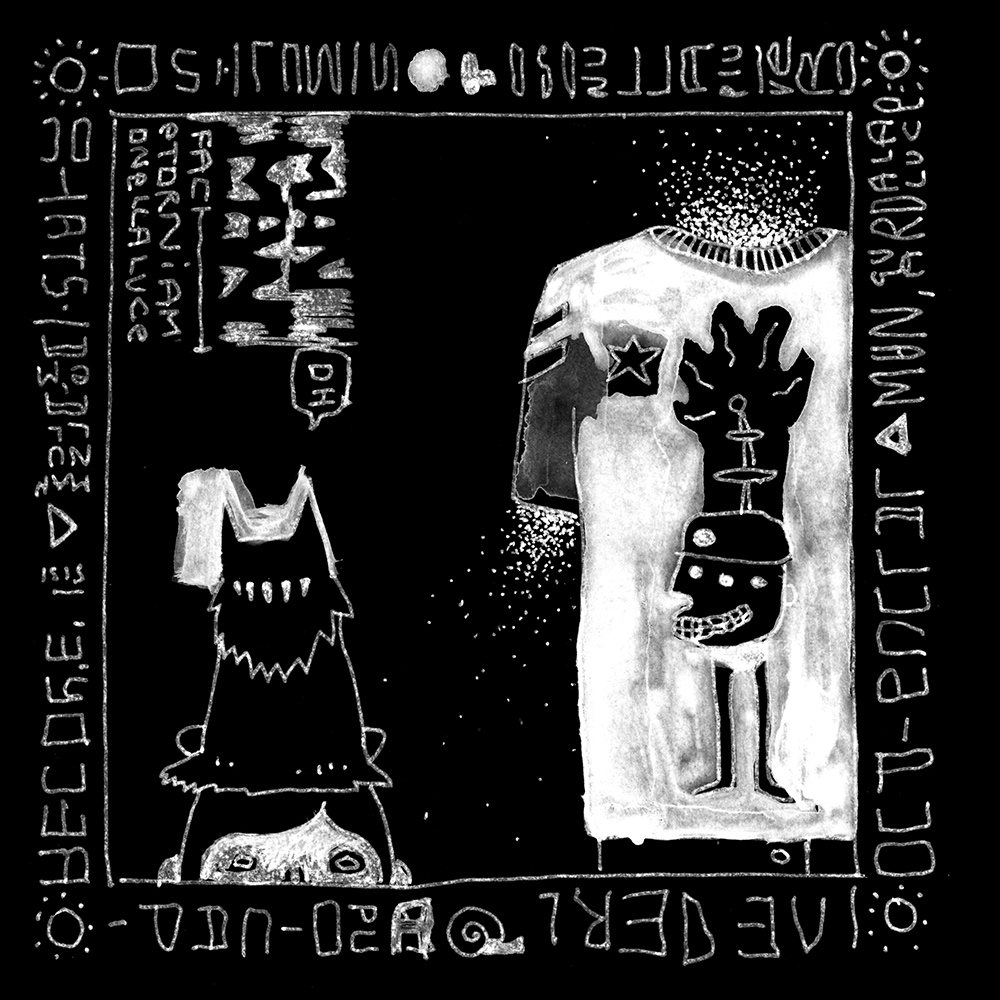 BACK TO TOP PREVIOUSNEXT